A downloadable game for Windows, macOS, and Linux

You find yourself in a dimly lit log cabin in the middle of the woods. You are starving to death. The stranger who resides there tells you that he will feed you if you defeat him in a game of cards.

Sacrifices Must Be Made is a game created for Ludum Dare 43. I produced the game code, art, and audio in 48 hours. Here's the Ludum Dare entry page!

The game should take around 10-15 minutes to complete. There is an ending so hang in there!

PS. This game was the basis for the next large-scale Daniel Mullins game, Inscryption! Currently in development.

Omfg what an ending and the hints throughout it all?! Happy i didn't give up when I got stuck but yeah!!

I got stuck at the beginning too lol

Hi dude sorry for begging but, i have made a video on this game and

i would really appreciate if you take a look at it: Link at the video

and sorry for begging.

will com again... anyway sorry for begging but, i have made a video on this game and i would really appreciate if you take a look at it (only if you want): Link at the video

and sorry again for begging.

Reply
Applestreet Games72 days ago
I had no idea this started with a game jam. Love Inscryption and loved this.
Reply
UnMajete82 days ago (1 edit)

Its really impresive how much a game can do with just a few resources. The atmosphere is crazy and really creepy as intended. Thank you for this and for (of course) Inscryption.

Reply
Call Me DNA89 days ago

I wish I could of got to the end! I felt extremely stuck so I gave up. One thing I'd like to mention about the game that could use improving. I felt as though there was a lack of audio in some areas and the areas that weren't lacking might have been a little too loud. But that is just my opinion. Loved the concept of the game but could not get to the end.

Reply
Call Me DNA89 days ago

I didn't realize this game was cleaned up and released so I'm gonna try the full thing!

The trick on the last level is to cut off your hand when you're in a position to deal some damage. Took me a couple tries to figure that out.

Even though it focused more in the atmosphere than in the strategy? 😏

Oh boy, what a great game! Hope there isn't a huge ARG and a bunch of lore! That would make it one of the best games ever and I'd be obsessed with it! Phew! Good thing this game has none of those!

This turned into one of THE BEST games ever made

Hey there, sorry for begging but it would be great if you take a look at my
video of this game: Don't forget to activate the subtitles

Great card game, one of the best I ever played!!

so this is why game jams are important...

wow it's amazing to see where it all started

I think we are all now so happy this happened!
Fucking rockstar

when i try to play the game it  crashes and deletes the exe file. and when i tried to move it to my usb it says it needs permission from the administrator. help???

the ending is kinda dark and i love it.

My antivirus quarantined the post-jam Windows version. Is it just me?

It was just me. My antivirus hadn't been updated.

Just to be clear, this has a different story from Inscryption. It is not a smaller version of it. It is a small game made for an indie jam using the same base. It is not a replacement for Inscryption, nor is it a demake of it. Sacrifices Must Be Made just is.

Sacrifices Must Be Made has good atmosphere, and makes you unsure of exactly what’s going on. I don’t know if being able to turn around would have helped - and I’m glad the designer chose not to add such a feature, since it would have been distracting and overwrought.

A similar problem that I had with another card game on itch.io, is that once you have the mechanics down, and know how to read the board state, you realize that you are smashing your face into a brick wall until the random number generator relents. And of course, seeing a path to victory in more difficult circumstances requires being okay to decent at card games. Fortunately for me, as a child, I played Magic: The Gathering, Yu-Gi-Oh!!, and Duel Masters, and read strategy articles and forum posts.

Other players would not be so fortunate, and the game seems to acquiesce to that frustration in order to get the player to finish the story. Waiting for R.N.G. to be good is a weakness of most card games, but that doesn’t mean it shouldn’t be mentioned here, and ignores that other card games alleviate it.

The knife isn’t really effective at helping the player unless he can read the board state accurately, which can be difficult to do, it seems, even in the fully-developed Inscryption. This is because although the weight scale gives off a creepy vibe, which is good for a horror game, it is difficult to tell how much progress a player would have based on weight, or how the game calculates progress. How do you know how much is needed to win? The assumption is that you simply need a certain amount ahead in sum. This of course goes back to most people not being good at card games and the need for the game to let them keep going at the story.

I had few issues on my first run, and quite a few issues on my second run, and I think that comes down to which cards I chose. I don’t know what the designer’s intentions were, if there was supposed to be a right and wrong choice, but it was noticeably easier to beat fight the dude across the table with certain card picks. Because of these card picks, the game was harder, and thus easier to get into a bad position, after which the dude across the table offers the player the knife, which is difficult to figure out when the best time to use it will be, because the player can’t figure out the board state, because the scale is obfuscates the progress towards victory, and the computer player can make any card they want, and it is hard to believe you can win, and I think wanting to give up is a powerful feeling that the game COULD have taken advantage of, but chose not to in order to get players across the finish line, which ultimately leads to a feeling of being stuck, which is a feeling itself could have been used to help the game. Even if you were good at card games, it can be a frustrating position to be in. You can see why the developer added the stalemate check to Inscryption.

Of course, Inscryption also suffers less from some of these weaknesses, because Inscryption has a deeper card pool, alleviating the pressure off of the constrained beast supply in being able to handle any threat the opponent sends you.

I’m choosing to view the abruptness of the ending as an artistic and poetic constraint as opposed to a result of a time restriction or a developer’s shrug. I do this because I believe the game is a little stronger by not telling you “either” “ending” is the “good” one or the “bad” one – as if developers of those games will even tell you which is which, and sometimes will only tell you that a set of them are “bad.” Dwelling on the decision would have been a mistake, and I am glad the game relents.

Inscryption seems to have taken in some of these lessons, and provides a deeper game, so I’ll look into purchasing it when I get a stronger computer.

The application “Sacrifices Must Be Made (OSX) 2” can’t be opened.

I'm not sure why as it isn't a Security or Permissions issue.

It is coded for Intel however it doesn't appear that Rosetta is pickup up to perform translation.

Daniel, please share with the Mac community a compatible version of Inscryption. I know many people who would purchase it if released in a heartbeat.

the ending is so dar

Olds will remember Sacrifices Must Be Made before Inscryption

Can't run it on mac. Says I don't have permission to open it.

Very atmospheric. I would have preferred if Inscryption was entirely this, to be honest.

Try the new expansion Kaycee's Mod. It's the exact thing many of us have been asking for.

Hey, this was really fun

Hey there! I played both. This game firstly a few months ago, then I played Inscryption a few weeks ago. I'm so happy for you and for this project! This is brilliant!

This game was awesome!!!! And it only succeeded in making me wanna play Inscrytion even more!!!! I just gotta get a better comp to run it first, so it might be a while.

But for now, here is my play through of this game, in case anyone is interested!!!

The best game that I have ever played. It started with cards but far beyond that.

THANK GOD!
I hated inscryption because that ending was just anti-fun. I bought the game thinking I could get good simple runs with endless replayability (act 1). The fact that the whole game (everything after act 1) was a linier "story-mode" rather than it being "run-based" killed it for me. Maybe this earlier build is what I was looking for. I just wish the whole game was just more of the gameplay loop we got in act one. I personally don't play games to feel hurt, I play them because I wanna feel satisfied in my fake accomplishments in a meaningless computer world. Don't get me wrong, I love and respected what it did. . . but that REALLY shouldn't have been "all" that it was if you are going to call it a rogue-like. The game desperately needed post-game content to support having "runs" rather than just "play-throughs".

That being said, I really hope inscryption gets DLC that adds an endless mode WITHOUT checkpoints that causes you to restart from the start after losing (maybe with randomized dungeons and you get to choose which act you wish to theme it off of for how the game plays), but for now, I'll settle for this, for however little extra it may be.

IS YOUR HEART PREPARED FOR KAYCEE’S MOD

I actually came here from Inscryption, glad I found out about this. It's great!

I absolutely loved this and now I'm have a great time with Inscryption, which is totally my game of the year. I'm a fan boy. Great work!

I played the Improved Game Jam, though I didn't notice any differences with the earlier version. I guess it must be more subtle changes like sound or colors?

It's really great that you're releasing a similar game that is more developped! I really enjoyed this one so I will be looking forward to it.

I like it.  Very cool.  If you implemented mouse wheel for moving forward and back, you might not even need the keyboard controls. 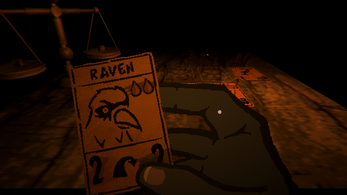 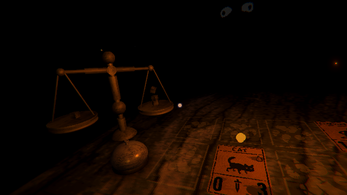 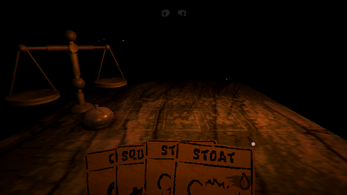