Hello! The positive reception of the game jam version of Sacrifices Must Be Made inspired me to do a bit more work on it. I love playing card games so working on one is a delight.

The game hasn't changed much in structure: it's still a short, linear experience with the same ending as the game jam entry. It's also much the same visually and I haven't touched the audio. "So what is different in this updated version?" you might ask.

I had a lot of fun adding some new playable cards to the game. These include cards like the Beehive, which adds a 1/1 flying Bee to your hand every time it's attacked and the Grizzly Cub and Wolf Cub which, if they survive on the board for long enough, grow up into a Grizzly Bear and Wolf respectively. Along with the new cards there are some hidden interactions between them that can be discovered. An example is how the Grizzly Bear will move right beside the Beehive when played and change its portrait to a more docile honey-enamored one. There are a few of these. I'm not even sure if it's possible right now, but something special happens if you are able to sacrifice the Cat 9 times.

In the original version planning ahead was difficult. In Sacrifices Must Be Made creatures attack the turn they are played, so your opponent can surprise you by playing a Hunter and attacking with it in a single turn. To mitigate this surprise factor, and allow you to plan more effectively, you can now see what creature is going into which lane one turn in advance. This totally changes the experience and creates way more situations where serious thought is required.

Spoiler: Sacrifices Must Be Made allows you to dismember yourself in two different ways in a desperate attempt to tip the scales in your favor. I added that in the second half of the last day of the jam, so the eyeball was a white sphere and the hand was a flat sprite with a box collider on it. The eyeball and hand are now much more realistic and much creepier.

I heard there was a bug in the game jam version? 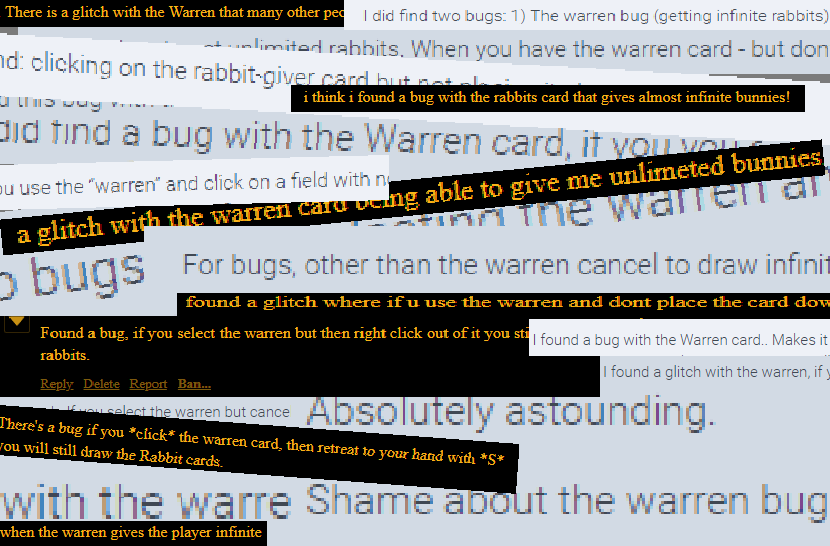 Luckily a few players let me know about a certain "Warren bug" in the game. This was a really simple one-line fix but I felt that it was against the spirit of the jam to fix it during the rating period. I also liked how it was a way to optionally cheat if the game's wacky difficulty curve was giving the player trouble. In all seriousness: having bugs pointed out is extremely helpful! So thank you.

You can download the latest version of Sacrifices Must Be Made here on itch!

Get Sacrifices Must Be Made

Sacrifices Must Be Made

You find yourself in a dimly lit log cabin in the middle of the woods. You are starving to death.